Today, we’re still dealing with law. But we’ll leave the political system of the universe for now, and take a look at something a little bit closer to fans of the franchise. Because today we’ll talk about The Toa Code and how it would look like. I’ll be also mentioning the Three Virtues again (as you find out they really are fundamental to The Matoran Universe). But without further ado I invite you to read and have fun.

Law is impotrant, without regulating freedom keeping peace would be impossible, as Abraham Lincoln once said, “My right to swing my fist ends where your nose begins”. And it is Law that we are going to be talking about today. But I don’t want to play around with civil law, instead i want to focus on the set of rules that adress heroes. I’m talking about a… document?… whose name have been mentioned several times in books and novels: the Toa Code.

We don’t know much about the code itself, ok we don’t know anything at all. The only thing we are sure of is that one entry, that states (indirectly or not) about the prohibition of killing enemies, excluding some special circumstances (ex. danger to life of Matoran or other Toa when the enemy is spared). Kinda bad anchor point. That’s why we need something, that could indicate values that the Toa have. Then, when we gather some information, I’ll move to formulating an example of the Toa Code.

The first indicator would be the known and loved Three Virtues. They are the basis for the functioning of the whole society, so they would have to have a role in the code.

The next element would not be so obvious. There are not many examples of when there are diferent values given rather than previously mentioned Three Virtues. But it doesn’t mean that there aren’t any. That’s when I’ll rely on Mata Nui Online Game II: The Final Chronicle. As we know, the game was about adventures of Hahli, a Ga-Matoran that was unexpectedly chosen by Turaga Nokama to represent her village in the Kohli tournament. In addition to this part of the plot, we have crystals and charms as the artifacts, and in this case the charms are the key. 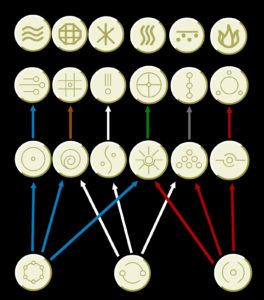 Origin system of Principles and Skills (with responding elements)

In MNOLG II there are 15 charms, 3 represent the Three Virtues, 6 – Kohli skills. the remaining six are the charms of principles:

Each of the principles is a derrivative of one or two of the virtues. That’s why I think that they should be mentioned in the code. This would also explain why Toa Hordika didn’t want to enter The Great Temple in BIONICLE 3: Web of Shadows; because according to them their purity has been violated, and would be a blemish for them as Toa.

As we all know, the best image is always composed with more than two clues. So we have the Three Virtues, the Principles and the prohibition of killing. Now we are ready to formulate the code.

If we take The Code as a set of rules that adress Toa, then it has to have a moralizing tone, to teach and admonish. That’s why further points should be written in imperative, even better when more in depth (commanding and clarifying). In addition the code of the knights of BIONICLE world, should also mention the Great Spirit, or even Great Beings. The best place to do this would be the introduction, an official one, stating the Toa mission, Which is to protect Matoran and every other inhabitant of Matoran Universe, so that the Great Spirit could function without any problems.

Remember that this version of The Code is entirely made up by me and it’s purpose is to give you an insight of what I think it could look like. Again I wanted this text to sound as moralizing as possible, that’s why I wrote it to sound like various Medieval codes present in modern pop culture.

We, Toa of all the Universe state, that this Code is to be followed by all the present and future Toa, For the health of the Great Spirit and Matoran – his People, protection from pain and death.

Warrior, if you are to keep the title of Toa and be worthy of your power, Remember these rules written in the time before time:

An eccentric, a philanthropist, a millionaire... I'm not any of these. But I'm a great enthusiast of the LEGO BIONICLE series, and what’s more important than your hobby? I've been a fan of the series since 2002, and since then I’ve sunk in this universe so deeply I don't know what kind of man I’d be without it. I'm also into informatics, digital graphics and Pokemon (As if I wasn’t nerdy enough already).